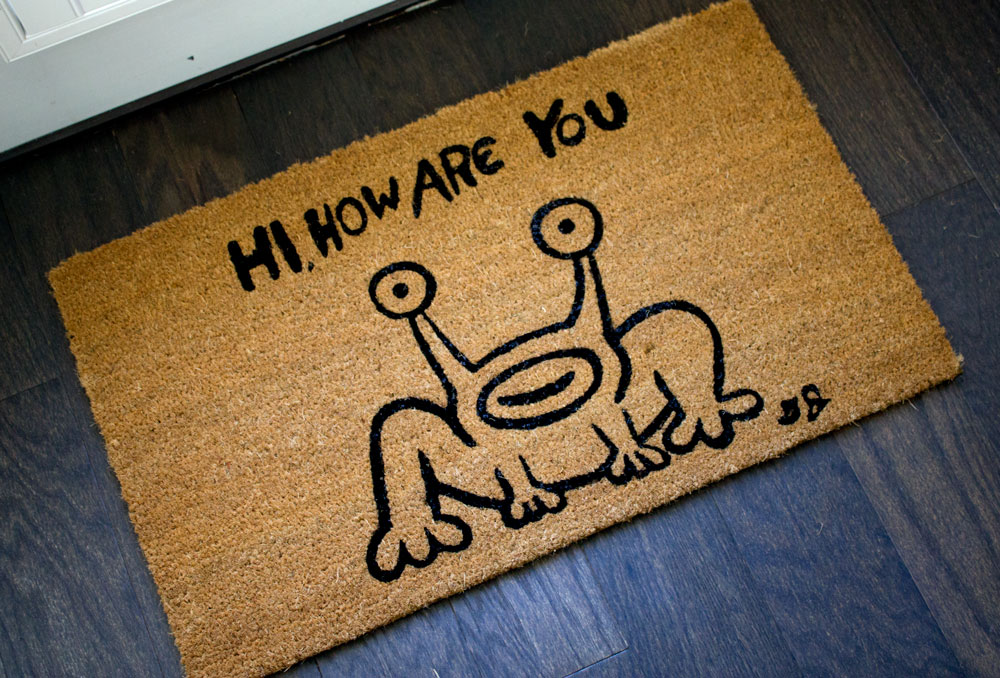 “Hi How Are You” Frog by Daniel Johnston

Got the doormat. It's awesome!

Awesome! Just got my Daniel Johnston Mat! Can't wait to start building my house now lol. Delivery was unexpectedly fast! Thanks again! I love it.

I don't think I've ever been this excited about a doormat.

Thanks again! So glad to have this great doormat!

Our welcome mats are produced with coir (coconut fibers), a bi-product of harvested coconuts.  Coconut trees require no chemical fertilizers for growth and produce up to 200 coconuts a year.

Made from organic coconut material that has little to no negative impact on the environment, our welcome mats aren’t just made with organic material but are also sourced to minimize pollution and waste!

Extracted from the hairy husk of a coconut, coco coir is one of the strongest natural fibers in existence. An extremely coarse and stiff fiber, coir effectively resists bacterial and fungal growth and defends against stress, water, and salt.

The “Hi How Are You” Frog Doormat

Jeremiah the Innocent (aka “Hi How Are You” Frog) is one of America’s most famous pieces of street art, and a defining piece of the Austin, TX art and music scene.  Welcome visitors to your house with this unique doormat featuring artwork by Daniel Johnston.

Story of the Mural

In 1993, the Sound Exchange record store in Austin, Texas commissioned Johnston to paint a mural of the Hi, How Are You? frog (also known as “Jeremiah the Innocent”) from his 1983 album cover. At the time, the frog image had recently become nationally recognized from media images of Kurt Cobain wearing a “Hi, How Are You?” T-shirt.

Daniel Johnston has spent the last 20 or so years exposing his heartrending tales of unrequited love, cosmic mishaps, and existential torment to an ever-growing international cult audience. Initiates, including a healthy number of discerning musicians and critics, have hailed him as an American original in the style of bluesman Robert Johnson and country legend Hank Williams. A number of artists — among them the Dead Milkmen, Yo La Tengo, the Velvet Underground’s songs. And he as collaborated with the likes of Jad Fair (a founding member of Half Japanese, who’ve also done Daniel’s songs), the Butthole Surfers, Bongwater/Shimmydisc guru Kramer, and members of Sonic Youth.

Surprisingly, the bulk of his considerable acclaim snowballed from a series of homemade, lo-fi cassettes which Daniel started recording and handing out to fans and friends alike in the early 80s. Eventually, the independent label Homestead re-issued some of these tapes on CD, and Johnston recorded a few new albums in almost-proper studios.